A young student of Cheryl Pan, a teacher of traditional Chinese dance, performs on stage in Circus Square Park on Saturday, September 25, 2021, for the Bowling Green International Festival.

Kentuckians gathered in Bowling Green’s Circus Square Park for the city’s 31st annual International Day. A huge range of musicians and dancers took to one of the park’s three stages to present their cultural music and dance performances, while various vendors offered an equally diverse range of food at their many stalls.
Some local businesses sold trinkets from cultures from around the world to passers-by while others ran food stalls, such as Churrería la Coneja, where husband and wife José and Maria Hilde offered churros and a variety of other foods. José bounced between two posts, one above a giant tub of fragrant and steaming churro dough, and the other in front of a press, where he swirled the churros in a large frying tub. Beside him, his daughter kept the register assiduously.
Among the many performers who took to the stage this weekend, three belly dancers from the Tula tribe came from Nashville to share their performance. “We dance a particular style of belly dance called the ‘Fat Chance’ style,” says founder Rachel Charlene. “It was once known as the American-Tribal Style, founded in San Francisco by a woman named Carolena Nericcio in the 90s.” They captivated audiences with their Middle Eastern jewelry and large 25-meter skirts while performing dances inspired by Egyptian, Folk, Classical Indian and Spanish flamenco movements. 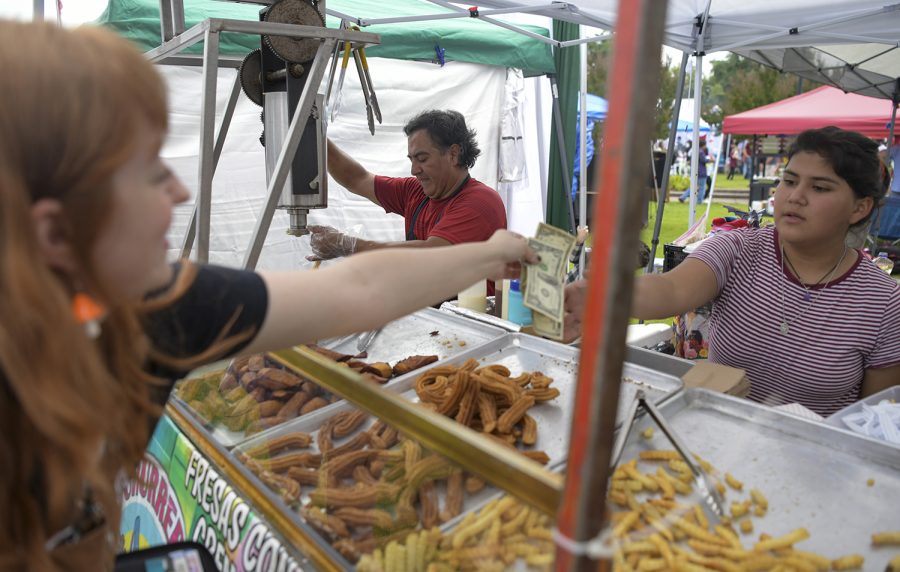 Churreria la Coneja owner José shoots churros in a deep fryer while his daughter handles cash and fills orders at their booth set up for the International Bowling Green Festival.