Hour, a troop of Sufi women. Photo by Amira Noshokaty

The 14th edition of the International Sama’a Festival for Spiritual Music and Singing kicked off at the Citadel in Cairo on Saturday September 18th.

Created by director Intesar Abdel-Fattah, the International Sama’a Festival is a very important artistic manifestation of how music uplifts the soul, unites humanity and promotes peace.

In his opening speech, Abdel-Fattah greeted the audience and underlined the importance of this edition, dubbing it â€œthe edition of challenge and perseveranceâ€.

This year, the guest of honor is Jordan, who is celebrating its centenary. Tunisia is also in the spotlight for the contributions of its troops to the festival throughout its history. 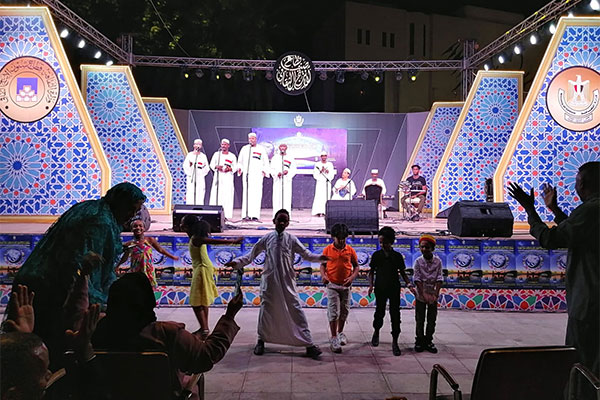 On Sunday, September 19, at the premises of the open area of â€‹â€‹the Al-Hanager Theater, the festival hosted a number of performances, including a powerful debut by the famous Egyptian Sufi chanting troupe â€œAl-Hadraâ€, which is the first Sufi troop to take zikr from mosques to theaters.

They were then followed by the French Sufi troupe ‘Le CÅ“ur de Paris, Les Etoiles de France’, a group of 4 musicians who are the students of Madame Caroline Dumas at LÃ©cole Normale De Musique De Paris.

The festival then moved on to a lively musical repertoire of the ‘Donqola Troupe’ from Sudan, which was just blissful.

Moving to the beat of the music, the all-male group engaged the audience, who were happy to applaud and sing along.

Their clever use of drums and quick maneuvering between notes made their vocals more vibrant and distinctly different from their peers.

The day ended with a refreshing change of pace when an ensemble of Egyptian Sufi women named ‘Hour’ took to the stage to sing and praise Prophet Muhamad with their powerful voices.

The festival will take place daily in several venues at 8:00 p.m. until September 24.