A man shows off a fish he caught at the festival. (Photo: VNA)

The Khmer people of Loc Khanh commune reside near natural “bau” (lakes) that vary in size from just over one hectare to several hectares. A lake located near a village is considered the common good of the community of that village and the local elders manage the body of water on behalf of the community.

“Bau” management not only ensures a reliable source of drinking water for livestock, but also preserves the aquatic fauna of the lake – a valuable food resource for the local population. They believe that the resources of the “bau” were granted to the local residents by the deities, so they must manage and use the lakes strictly and respectfully.

Under local law, anyone who catches fish in the “bau” without permission from the elders will be severely punished. The Khmers choose a person to protect the “bau” and to inform the elders when it is time to hold the festival. Locals are allowed to catch fish in the ‘bau’ during the ‘Pa Dua Tpeng’ festival.

The festival often takes place in the third lunar month, before Chol Chnam Thmay – the traditional New Year festival of the Khmer people. At this time, the ‘bau’ dried up and the fish and other aquatic species became large enough to be harvested and serve their purpose in the rituals of the festival and to produce enough food for the inhabitants. 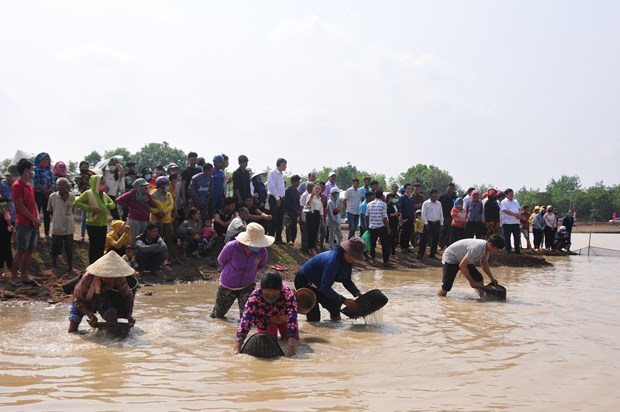 This traditional festival has been practiced for generations of Khmers. Previously, it was organized in different lakes like K’Poot, Sa Let, Ca Loc and Sen. However, only the Loc Khanh commune festival has been preserved as many other lakes now serve other purposes.

Throughout the festival, Khmers pray for peace, good health and a bumper harvest. The festival takes place at the Ong Ta temple and around the ‘bau’ where the main rituals and activities of the festival take place.

Offerings to the deities include the head of a pig, naturally raised by a local family and chosen by the village elders. To participate in the festival, families must prepare food and tools to catch fish. After the rituals Ong Ta Templethey move to the ‘bau’ to continue with more rituals and activities as part of the festival.

At the “bau”, the offerings are laid out towards the west while the elders look towards the east to perform rituals.

It is believed that those who catch big fish receive blessings. They then offer the fish to the elders as a sign of respect for the elders and to thank them for their great contribution to the community over the years.

Fish can be cooked and traded by families at the festival or taken home to eat.

After the fishing portion of the festival is over, local residents perform folk songs and dances to bring the curtain down on the celebrations.

With its typically Khmer values, the “Pa Dua Tpeng” festival in Loc Khanh commune has been recognized by the Ministry of Culture, Sports and Tourism as part of the national intangible cultural heritage.

Lam Bac, an elderly person from the hamlet of Soc Lon, said he and the Khmer community were excited about the recognition and hoped the legacy of the festival would be preserved for many generations./.