Students present dishes from around the world at the International Festival

Get the latest news from Syracuse delivered straight to your inbox.
Subscribe to our newsletter here.

The Syracuse University Cultural Student Unions filled the Goldstein Auditorium with an array of dishes from around the world and converged for what was essentially the ultimate potluck at this year’s International Festival.

For just $1 on April 24, students could purchase a tasting ticket and sample foods from South Asia, China, the Philippines, Africa, Europe, the Caribbean and more.

AGSN supports African SU and SUNY-ESF graduate students both professionally and culturally. It helps students network and develop their careers while connecting them to a familiar culture and values, said Marcellin Adjoumane, treasurer of the AGSN.

“This organization helps incoming graduate students from Africa feel like (they are) part of a community and family, and find opportunities that may not otherwise be available to them,” Adjoumane said.

AGSN offered East African soup, fried rice and ugali, which the organization specifically chose to show the range of cuisines in Africa, Adjoumane said. He added that in addition to all the food options, he was delighted to share the colors of Africa – bright pink, yellow and green – commonly seen in clothing and accessories, some of which were displayed on the dining table. AGSN.

The Caribbean is full of beautiful music, clothing and history, said St. Croix sophomore Layla Bradshaw. CSA brings that passion to Syracuse – it’s a place where students of Caribbean descent can both connect with each other and educate others about Caribbean culture and diversity.

“Part of what our organization aims to do is share our culture with the community, and we do that through Caribfest and other small activities that we organize,” said Makayla Tucker, a freshman from Bermuda. . “We’re really open to getting other people to join.”

For their food distribution, CSA chose the Dominican dish of Pastelón Plátano Maduro as well as sorrel, salt fish cakes and lemonade.

Zeming Lu, chairman of CU, said he wanted to change perceptions around Chinese food and have people taste something other than dumplings for a change. For its picks at the International Festival, CU featured Wuhan dry hot noodles and sesame paste, both of which are street foods, Lu said.

Many organizations expressed pride in their respective cultures, and Lu said he was very happy to see different cultural groups celebrating together at an event like this.

“We’ve brought together a group of international students from China, and we’re certainly giving them some comfort by organizing events…like an international festival.” he said.

“The fact that we make food and share it with other people, that embodies French culture in itself,” Faure-Dauphin said.

But ESA isn’t just focused on France – the organization has hung several flags from countries like Norway, Bosnia and Herzegovina and Azerbaijan on its table, each representing a member’s nationality. Faure-Dauphin said ESA’s goal is to create a small community on campus, connect European students and help them find a home, even in central New York.

FSA created a party-themed table for the International Festival – vibrant colors, cascading banners and of course, lots of Filipino flags. Enrique Ramon Prejula, vice-president of the FSA, said the group wanted this theme to carry over to the dishes they served. They therefore chose pancit bihon, a dish often present during Filipino celebrations, as well as pastillas for dessert.

Prejula said he was very happy to show attendees of the International Festival the hospitality for which the Philippines is so widely known. The Filipino and Filipino American community on campus is still relatively small, he said, but the FSA is happy to welcome anyone interested in learning more about Filipino culture.

“What I am thrilled to share is the drive and hospitality of Filipinos,” Prejula said. “There are over 7,100 islands in the Philippines, and despite all the islands, the Philippines is one big family. … We always carry our flag with us, no matter where we go.

Affiliated with the Department of Language, Literature and Linguistics, La Société francophone organizes various events throughout the year, such as cooking demonstrations, to get people excited about francophone culture. Unlike other organizations present at the International Festival, La Société francophone represents many different cultures and nationalities, said the organization’s treasurer, John Moses, who is from Quebec.

“We represent countries from every continent on Earth, other than Antarctica, … representing a whole plethora of cultures, foods and languages ​​that are all part of this Francophone community,” Moses said.

The organization served crepes, Martinican punch and poutine, for which Moses said he had a good recipe. The Francophone Society has particularly opted for these foods, because each food comes from a different region of the world, respectively Europe, the Caribbean and Canada. 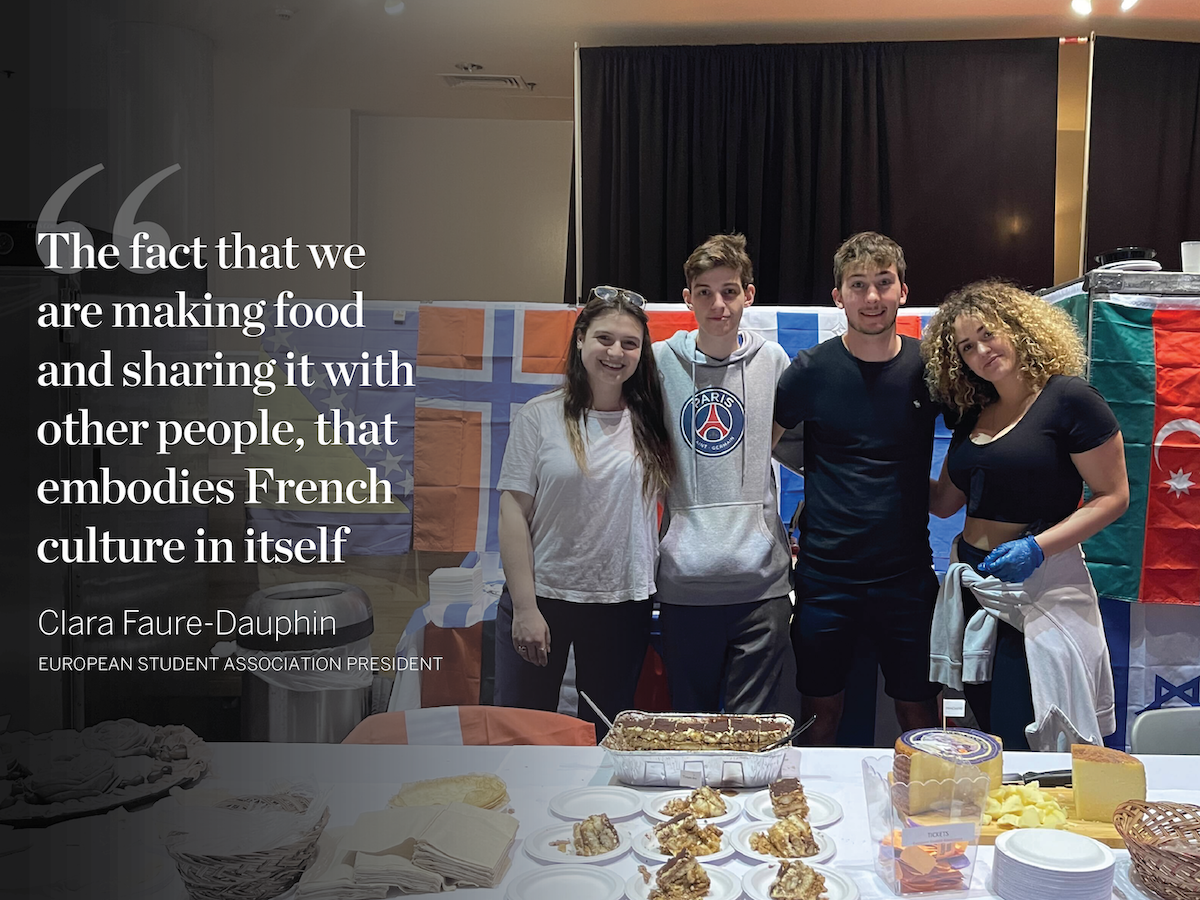 Representing more than 10 Latin American countries, the Latin American Student Association aims to create a Spanish-speaking community, students at the organization’s table said. While LASA is just getting started at SU, students said they hope to fundraise for local Latin American organizations and host events to share their culture with campus.

LASA served tacos at the International Festival because they’re so easy to customize, students at the organization’s table said.

Although the organization is representative of South Asian students on campus, Aliya Huseni, Vice President of SASA, said everyone can experience, learn and enjoy South Asian culture through its events. SASA has hosted Garba, Diwali and Holi, and plans to hold an Eid al-Fitr celebration in May.

“We do our best to represent all religions, all South Asian cultures on campus,” Huseni said.