The relatively young showcase is the first human rights film festival in an HBCU.

Independent films were back in theaters in the third edition Morehouse College Human Rights Film Festival, drawing attention to issues such as mental illness, suicide and social justice.

The three-day festival provided a platform for filmmakers and activists to help audiences better understand the social issues we face today.

Morehouse President Dr David Thomas said the institution has “created the opportunity to share films that are all about human rights and have been deeply rooted in Morehouse’s identity since our inception.”

The festival’s first in-person event took place in 2019 and the second met virtually in 2020. This year’s festival used a hybrid approach of in-person and virtual screenings for the enjoyment of moviegoers.

Kara Walker, the executive director of the film festival, said SaportaReport, “the fact that people aren’t necessarily comfortable going out and sitting down again in a theater with rising numbers, we’re happy to do that.”

However, Walker revealed that there were more virtual attendees than in person.

The stars of “Red Horizon” participate in a post-screening discussion on the second night of the Morehouse College Human Rights Film Festival.
Credit: Allison Joyner

â€œIt’s understandable because people can watch movies from the comfort of their own homes. They don’t have to drive anywhere and they can rest assured that they are reasonably safe inside, â€she continued.

â€œOn Treesâ€ was the flagship film at this year’s festival and filmmaker Korstiaan Vandiver directed the short horror / thriller that explored the COVID-19 epidemics, black-versus-black violence and suicide.

Shot in southern Georgia, the film deals with mental health stigma in the African American community, Vandiver said in a post-viewing discussion. â€œWe’re starting to talk about it more, but I think we can always do better with this topic and talk about these things and I hope people can get some help,â€ he said.

Another festival favorite was the high-flying documentary, “Red Horizon,” which showed the attempts of a group of young pilots to carry on the legacy of the Tuskegee Airmen while struggling to overcome racism and prejudice in the world of flying. ‘today.

Walker and his team decided to end the in-person portion of the festival with the inspiring documentary “No Time to Waste: Betty Reid Soskin’s Urgent Mission.”

The feature-length documentary follows the oldest of the United States’ National Park rangers with her mission to restore crucial missing chapters in American history, including the contribution of black women to World War II efforts.

In a particularly strong moment, the film showed Soskin, who had just turned 100, addressing a small group of visitors to San Francisco’s Rosie the Riveter National Historic Park and Museum / WWII Home Front recounting her personal story of being a young black woman in a segregated WWII union hall.

Another favorite was “Eavesdropping on the Elders”, written by Kiah Clingman and CJ Sykes. The duo were inspired to create the film from the writings of Clingman’s father, who now lives with ALS.

Described as a girl challenged to bridge the two-generation divide, the protagonist is forced into another world where she is confronted with lessons from history makers of the past including Fredrick Douglas, Harriet Tubman, Marcus Garvey and WEB DuBois.

â€œI saw it was a human rights festival,â€ Clingman said SaportaReport, “I knew it spoke directly to our theme that my dad has been fighting for 75 years and I knew it would be a perfect fit.”

After receiving the award for Best Short Film, Sykes, a former Morehouse student, was excited when Clingman entered â€œEavesdroppingâ€ into the festival.

â€œGoing back all those years and then winning a festival for a project I helped write was a special feeling,â€ said Sykes.

â€œIt’s important for a festival like the Morehouse College Human Rights Film Festival to give these independent filmmakers a platform to showcase the work that many of them have invested so much time, energy and effort to tackle. important topics, â€Walker said. 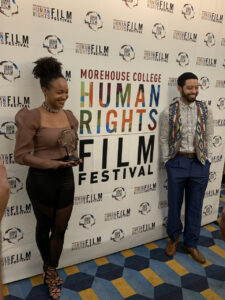 The festival also allowed future filmmakers to present their works in a cinema setting. Fifteen applications from students from Spelman College, the University of North Carolina School of the Arts, and Morehouse College showcased their completed projects during the student presentation.

â€œThe festival allowed them to cut their teeth with an audience,â€ Walker said. “It is important.”

Walker also wants to host screenings at local high schools and workshops on the Morehouse campus once the pandemic is over.